No, Trump won't drop out, and it wouldn't matter if he did. 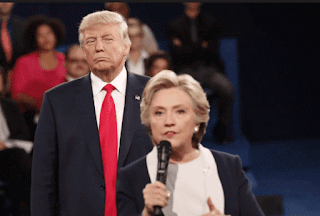 Perhaps I am stating the obvious here, but Donald Trump will never, ever drop out. Obviously, because he is Trump, his ego would not allow him to admit a mistake. But the Republican party members who fantasize about replacing him with another candidate are not grasping a bigger point: there are
a whole bunch of reasons why replacing Trump wouldn't save this election right now.

The die-hard Trump fans are real. They may not be a majority of the country. They may or may not even be a majority of the Republican party. But they are a substantial group -- let's wildly guess at least 30% of the party -- and they totally love what Trump is selling: putting women, uppity minorities, and scumbag liberals in their proper place. The outwardly more stable elements of the GOP, your George Wills and your William Kristols, they can wring their hands and pay all the lip service they want to how that's not really who they are. But that group of die-hards are the ones who Trump bragged wouldn't quit him even if he shot someone in broad daylight. I think that's true. I don't think it's true of all or even most Republicans, but enough of them.

So here's what happens if Trump is somehow forced to step down, or he just flips a table and stalks out on his own. He takes most of those people with him. Either way, they're going to loudly declare that the Republican party has been taken over by a bunch of pussies and cucks, and hey, screw that Mike Pence bastard anyway for throwing Trump under the bus, Pence can't run a country if he doesn't even respect Vladimir Putin.

This is the corner that the Republican party has painted themselves into. They've spent decades denouncing the concept of experts and intellectuals and fact checking. They've made everything out to be subjective, and all they have left to fill the vacuum is the cult of personality that created this monstrosity of a campaign in the first place.

I'm not telling people to get complacent. You should vote for Clinton, because she doesn't just need to win; she needs a landslide. Even if you're tepid on Clinton as a candidate from a personal point of view, it's important that this country firmly and unambiguously renounce the deplorables. Vote. Donate. Phone bank on election week. Don't just make Trump lose; humiliate him thoroughly for all time.

The next election will probably bring on more of the same. If the Republicans bury their heads in the sand and leave the primary process as it is, there are plenty of other Trumps waiting to take on the mantle. If the Republicans DO change their primary system, they'll piss off the deplorables and be left with a fairly pitiful token opposition without that boost. Either way, they'll lose again. Make it happen.
Posted by Unknown at 10:12 AM