Here's the weirdest thing I learned via Wikipedia today.

As you may know, there are those out there who attempt to influence the content of childrens' television.  We call them "parents groups," although many are not comprised of parents, or at least not of folks whose primary interest is as parents.  Study them and you'll find a wide array of agendum at work...and I suspect that, in some cases, their stated goals are far from their real goals.

Nevertheless, they all seek to make kidvid more enriching and redeeming, at least by their definitions, and at the time, they had enough clout to cause the networks to yield.  Consultants were brought in and we, the folks who were writing cartoons, were ordered to include certain "pro-social" morals in our shows.  At the time, the dominant "pro-social" moral was as follows: The group is always right...the complainer is always wrong.

This was the message of way too many eighties' cartoon shows.  If all your friends want to go get pizza and you want a burger, you should bow to the will of the majority and go get pizza with them.  There was even a show for one season on CBS called The Get-Along Gang, which was dedicated unabashedly to this principle.  Each week, whichever member of the gang didn't get along with the gang learned the error of his or her ways.

I assume that this valuable social message also extends to your mother's favorite line about everyone else jumping off a bridge. 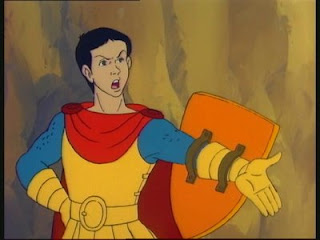 So in the Dungeons & Dragons cartoon, for some weird reason they were forced to keep contriving situations for Eric, the whiny cavalier, to complain about what the rest of the group was doing... so that they could promote the message by ultimately making him look dumb or suffer in some way.

I recently read (most of) David Sirota's latest book, Back to our Future: How the 1980s Explain the World We Live in Now--Our Culture, Our Politics, Our Everything.  I enjoyed it, but at the same time, I found it a little excessively paranoid.  Sirota's thesis is that the movies, shows, and all other entertainment that we consumed as kids in the Reagan era was all part of an overarching propaganda machine, pushing various right wing values like nationalism, consumerism, and the notion that all government is part of an evil conspiracy.  In some cases I saw his point, and in others I just felt like it was a big Rorschach test where Sirota was superimposing his framework on everything he could find.

Anyway, I can't make heads or tails of this "the group is always right" thing, which is one case where there seems to have been an actual conspiracy by a specific group of individuals openly trying to give all shows a consistent message.


On a side note, blogger.com told me today that I should try switching my blog over to their nifty new customizable display format.  So I did, because the group is always right and I don't want to be a complainer.

I haven't spent enough time browsing it to decide if I hate it.  But if you hate it, feel free to let me know.
Posted by Unknown at 10:09 AM 5 comments: Links to this post

Am I spreading myself too thin here?  Between the Atheist Experience blog (now new and improved on freethoughtblogs.com!), Castles of Air, and other media formats, it seems like this blog is one of the main casualties that doesn't get enough love.  Really short remarks go on Twitter, less short discussions on Facebook, programming stuff goes on CoA, and a lot of comments I just save for the show.  But wait, there is one thing I can always put here: arguments with economic conservatives!  And here we go again.

I have a firm policy of refusing to humor people whose method of arguing is sending me links to YouTube.  But I made a special exception in this case because it's Penn Jillette, and Penn -- while very often wrong -- is always so very, very cool.


So, okay, I watched this video and was, as always, entertained by Penn's speaking style.  And IMHO he's still wrong.

Penn obviously made some reasonable points that are easy to agree with.  "Let's stop the government from doing really stupid stuff."  Well, duh, yeah!  I'm against things that are stupid!  Way to go out on a limb, Penn!  Solidarity, man!

In all seriousness, Penn and I agree on a lot of things, because many of his beliefs are already in the Venn diagram that includes liberals.  Let's stop killing people we don't know for reasons we don't understand: check.  Let's stop bailing out rich people: check.  No more tobacco subsidies: check.  Stop wasting time locking up people with marijuana, okay.

But then he gets to the part where a libertarian and a liberal would disagree... and he just chickens out.  He says "You can make that argument that we still need education, and we still need infrastructure, and you'll probably win with me."  Woot!  I beat Penn Jillette without saying a word!

Actually, let me make this response explicit.  Hey, Penn.  We still need education, and we still need infrastructure.  That is stuff that government does well and libertarian candidates don't propose a good and practical alternative to it.  In fact, let's go back to the beginning of the video, and see why Penn Jillette thinks we don't actually need public education anymore.  "I believe the tools are in place for people to learn on their own... I think that education is going to come from the web."

And that is, as Penn himself might say, "Bullshit!"  Yes, most people have access to the web now.  NO, that doesn't mean that it's an acceptable substitute for having actual teachers who spend individual time with students and react to their needs.  You'll notice that despite all his praise of the internet, Penn states that he sends his own kids to "fancy ass private schools," and good for them!  They're lucky to have a dad whose net worth is $175 million.  But hey, if you're a poor kid then you can damn well flail around on web sites and educate yourself.

If you want to make me waste time on this (and I hope you won't, because it's too bloody obvious) I'll slap together some statistics -- yet again -- that show that countries which have solid public education systems have a more educated populace; and people who have a high school diploma -- yes, even  from one of those dreaded public high schools, like me -- are better off and more successful (statistically, as a group) than people whose only education comes from "the internet."

See, the argument is not that some elitist government has to bring "enlightenment" to people.  It's that it is a social good and in all our best interests for our citizens to be educated.  And in the event that we have kids whose parents can't send them to fancy-ass private schools, we provide publicly funded alternatives to them rather than just throwing them under the bus and saying "Here, Timmy, play with this smart phone.  See you in twelve years!"

And I'd gladly argue with Penn about bridges and infrastructure, too.  But as I already said, I can't, because in this particular video Penn conceded that without a fight.
Posted by Unknown at 1:18 PM 10 comments: Links to this post

Just for the hell of it, and to keep this from being a dead blog, here's my report on what TV shows I've been watching on Netflix.  Obviously this doesn't exactly count as earth-shattering news, but what the hey.

I usually don't sit and watch TV while doing nothing else, but I'll frequently have it on in the background while doing other activities.

Well, that about covers it.  I know it sounds like I watch a lot of TV, but as I said, I often play it as background noise in the car and while working on other stuff, and it took me over three years to get through Doctor Who, so, you know...
Posted by Unknown at 1:15 PM 8 comments: Links to this post