“I further propose we inspire the ingenuity and resolve of the American people,” Mr. McCain said, “by offering a $300 million prize for the development of a battery package that has the size, capacity, cost and power to leapfrog the commercially available plug-in hybrids or electric cars.”

He said the winner should deliver power at 30 percent of current costs. “That’s one dollar, one dollar, for every man, woman and child in the U.S. — a small price to pay for helping to break the back of our oil dependency,” he said.

If a corporation were to dedicate genuine effort to build this miracle battery, it would assign a director to the project, who would allocate a certain number of man-hours to the problem. The people who worked on the project would all have access to one another's research, and they would all get paid regardless of whether they arrived at a solution. Big companies, like governments are common pools for a lot of money, which is why they can afford to invest large sums up front to achieve a desired solutions.

Imagine a company instead saying "Okay, all of you employees start coming up with crazy ideas to design your own battery. Whoever pulls it off gets a gigantic bonus. Everyone else gets paid nothing." That's essentially what John McCain's proposal is. He's not fronting ANY of the money to generate this research. He's not proposing to absorb any of the risk, since if no engine gets built, no prize gets awarded. All he's offering to do is buy a finished product which does not yet exist.

I have to conclude that John McCain is not in the slightest bit serious about actually funding a solution to the problem. R&D is risky, therefore the cost of doing it is far higher than developing an actual product using known techniques. In any case, anyone who was capable of creating the miracle battery using only the funds available to an unfinanced individual would be able to make so much money from it that being bought out for $300 million in the end would most likely be insulting.

If McCain thinks the free market is so darn awesome, why hasn't the magic battery been produced already? This is a man who has no ideas.
Posted by Unknown at 5:44 PM 5 comments: Links to this post

A friend of mine (Buffy) just invited me to join Goodreads.com. It's a good recommendation for me, because I am a sucker for these social information-organizing web 2.0 sites.

So I'm adding stuff to my bookshelf, and in the process, I'm going back through my blog searching for books that I've discussed. I came across a mention of Ender's Game, and -- when will I ever learn -- went browsing through recent news about Orson Scott Card.

It looks like Hack Neocon Fundie Blogger Card is once again going around the space-time continuum desecrating the works of Talented Sci-Fi Author Card. This time he's writing a fanfic sequel to one of my other favorite TSFA Card novels, Pastwatch.

The original Pastwatch is a very enjoyable yarn about some Africa-based time travelers who are reluctantly driven to fix the past by interfering with the "Columbus discovers America" event. The story of Noah's flood is touched upon, but treated appropriately as the origin of a myth -- it appears to be a local flood and the Biblical details are greatly exaggerated.

What we have planned for further books in the Pastwatch series (yep, series) are books that take place sort of in the midst of the Columbus book. There's the Noah book, which tells Kemal's story as frame but Noah's story and the flood as the main tale, and then there's the Garden of Eden story - yep, the hoariest cliche in science fiction, but I have no fear, the artsy types couldn't possibly despise me more, and I think there's a reason why it is the most-written cliche story in the field. People are hungry for a rational treatment of that story in science fictional terms. So ... I mean to give it a try. We'll see if anyone but me likes it.

I suppose it's remotely possible that HNFB Card will treat TSFA Card's source material with the respect and appreciation it deserves, and not turn stories about Noah's flood and the Garden of freakin' Eden into some obsessive religious rant. However, I have my doubts, given that he can't even get through one question about it in an interview without making some lame, smarmy swipe about mean liberal critics.
Posted by Unknown at 9:47 AM 2 comments: Links to this post

If anyone enjoyed the Sudoku program I made earlier, I should let you know that it's been updated.

In the latest version you can click on the game board and type numbers directly into the screen, instead of messing around with the text box. You can still copy the contents on the text box and save them for later retrieval.

Also, the box now displays periods instead of spaces for empty squares. This way, the correct amount of white space doesn't disappear when you type it in an HTML comment. For instance, in a previous comment, Tatarize was trying to get me to try this puzzle:

Go ahead and paste that in... it's long, but still quick at maximum speed.
Posted by Unknown at 12:36 PM No comments: Links to this post

Okay, so it's one poll. It's also one day (give or take) after Barack Obama became the official Democratic nominee. (Oh, you hadn't heard that yet?) He hasn't even started campaigning against McCain yet, who's had the benefit of being the declared Republican for couple of months.

Now on the one hand, I'm sure the Rovish knives will come out in full force at this point. On the other hand, I (perhaps naively) think the negatives about Obama have pretty much been aired out already. People who think he is simultaneously a Muslim, and atheist, and a scary black Christian, already think that at this point. This isn't going to change much, and the current numbers probably reflect this.

Is it okay to be cautiously optimistic yet?
Posted by Unknown at 7:16 AM 8 comments: Links to this post

As I mentioned two weeks ago, I started playing around with a Sudoku solving program. So finally, here it is. Your browser must have Java enabled to view it. 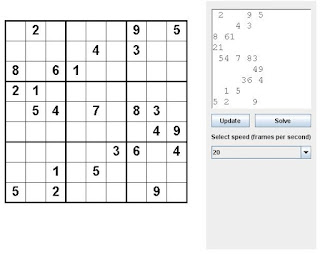 To watch the program solve a puzzle, click "Solve." You can enter new puzzles by typing numbers in the text box and clicking "update." I recommend going to websudoku.com, copying a hard puzzle, and cheating to get a fast time.

Future updates include (if I don't get too lazy):
Updates: Validates puzzles correctly. "Maximum" option set on speed bar. Move counter added.
Posted by Unknown at 9:18 PM 3 comments: Links to this post