Evan Almighty: Blessed are the fictional

I watched Evan Almighty on video last night, even though I didn't particularly love Bruce Almighty. It was what I expected, a cute but corny lightweight comedy with a little touch of preachiness and some enjoyable special effects. The Bible story of Noah is watered down a lot, so six billion people don't actually die in a global flood. Steve Carell is acceptably funny, but it's not like his hilarious performance in 40 Year Old Virgin.

Anyway, the movie does deliver kind of a bland religious message, which got me thinking a bit last night. I think I'd be right to say that in just about every movie where God appears in person (as it were) in modern times, there is this obligatory scene where the main character has to be skeptical for a few minutes. You know the scene I mean:
God: "Hi, I'm God."
Mortal: "No you're not! You're a crazy old man who bears a striking resemblance to Morgan Freeman/George Burns/Alanis Morissette/etc."
God: "No seriously, I'm God."
Mortal: "I'm not talking to you anymore."
God: "Here, watch this trick."
(God does various impressive feats in which demonstrates uncanny knowledge and/or screws with the laws of physics.)
Mortal: "Stop! Uncle! I guess you are God."

Of course other characters remain skeptical, because God decides to be a complete dick by not revealing himself to anyone except for the guy he's inciting to crazy behavior. By the end of the movie, though, something remarkably improbable has occurred that makes it clear to everyone that the guy who talks to God was right.

This formula is loosely based on the Bible story of Doubting Thomas. Similar form:
Jesus: "Hey Thomas, it's me, Jesus."
Thomas: "Nuh uh! You're dead!"
Jesus: "No, seriously, it's me. Touch me. Poke your fingers through the stake holes in my hand."
Thomas: "Whoa."

And then there's the punchline.
Jesus: "Thomas, because thou hast seen me, thou hast believed: blessed are they that have not seen, and yet have believed."

In the story of Doubting Thomas, and Evan Almighty, it turns out to be a good idea to believe in God. But only because they inhabit a fictional world in which God is real and reveals himself through evidence.

And there's the problem. At least part of the point of these stories is to serve as an inspirational example for those of us who live here in the non-fictional world. But in the real world, God never does these tricks for real people. So instead, we're encouraged to base our faith on "evidence" which occurs in fiction.

I'm reminded of an M.C. Escher print of a dragon who is "trying" to get out of his two dimensional world, but fails. 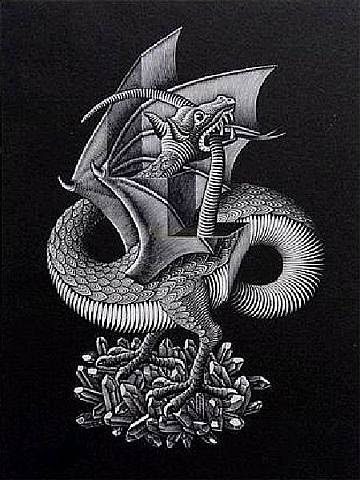 Of this picture, Escher wrote:

"However much this dragon tries to be spatial, he remains completely flat. Two incisions are made in the paper on which he is printed. then it is folded in such a way as to leave two square openings. But this dragon is an obstinate beast, and in spite of his two dimensions he persists in assuming that he has three; so he sticks his head through one of the holes and his tail through the other."

Like the dragon, people seem to try really hard to make God real by having him demonstrate his powers over and over again. Yet however much this god tries to be real, he remains a character in a story.

I'll give Evan Almighty two and a half stars out of five. It was cute, it wasn't a complete waste of time to watch, but it wasn't a must-see comedy.
Posted by Unknown at 11:54 AM